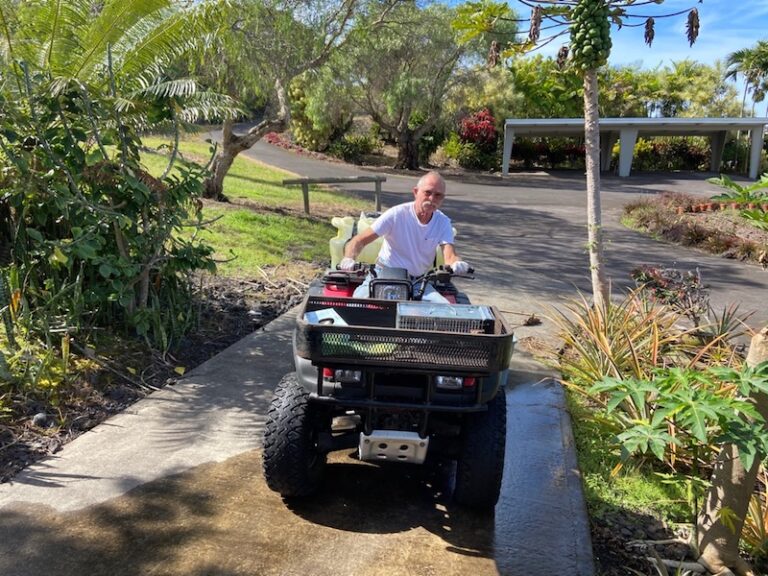 It’s early spring and like much of the rest of the world we’re adjusting to life in lockdown. Tourists have all but fled and the residents are hunkering down as we all do our best on the Big Island to flatten the curve. Like the rest of you we’ve been grappling with the new normal here at Horizon, so we decided to turn our blog microscope to life behind the scenes at HGH.

On March 25 everyone in Hawaii was required to stay at home or in their place of residence. The next day the state of Hawaii mandated a quarantine period of 14 days for all visitors to the island. Cancellations came thick and fast. But while we might not have any guests due to the lockdown it doesn’t mean there aren’t plenty of chores and projects to work on.

Then on April 1, all persons traveling between any of the islands in the state of Hawaii became subject to mandatory self-quarantine.

Meanwhile, thousands of miles to the south in New Zealand, Clem’s partner Angus was trying to get to Hawaii having just had his immigrant visa approved. After many flight changes, and frantic packing, Angus caught one of the last flights out of New Zealand before the government announced the country was going into lockdown.

Almost exactly four years after they first met, and after time spent in both countries, Angus arrived in Hawaii as a newly-minted permanent resident.

Finally! It was time to get on with their lives together. Unfortunately, Angus arrived just before the lockdown was enforced. After careful deliberation it was decided it was sensible to quarantine, just to be on the safe side (luckily he was fine).

With contact not allowed (not even a hug!) and social distance mandated at all times, Clem whisked Angus back to Horizon and into 14 day quarantine.

Alone together was the new normal. At least for the following two weeks! But spring was in the air, the weather was good, and it was perfect timing for some landscape gardening. 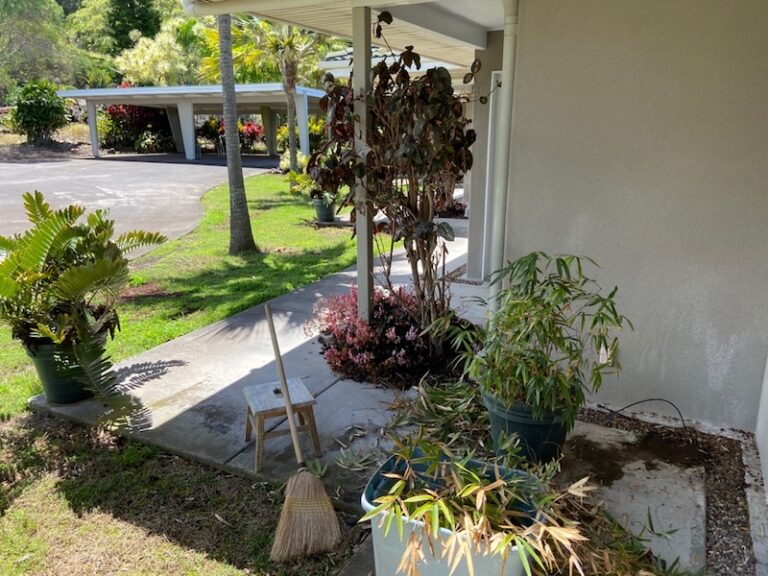 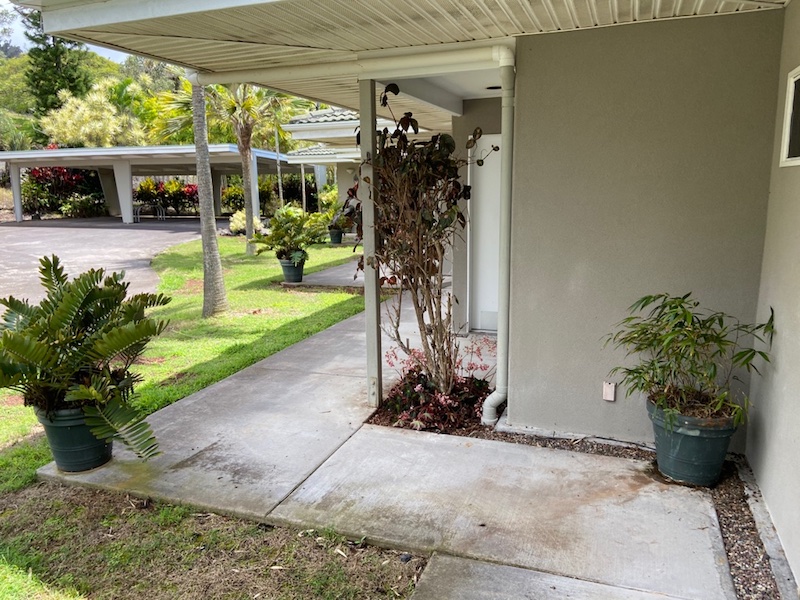 First up, landscaping and weeding around the guest rooms. Garden maintenance is always done on a regular basis but with more time it was a great opportunity to tackle the bigger jobs. 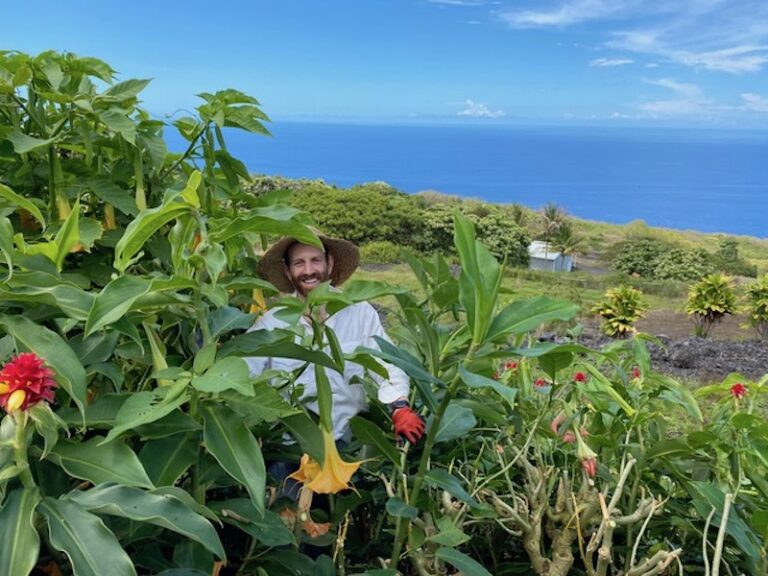 Angus works on cutting back the overgrown datura to the level of the rock wall in front of the guest rooms. Hedges between the guest rooms are trimmed and sculpted. 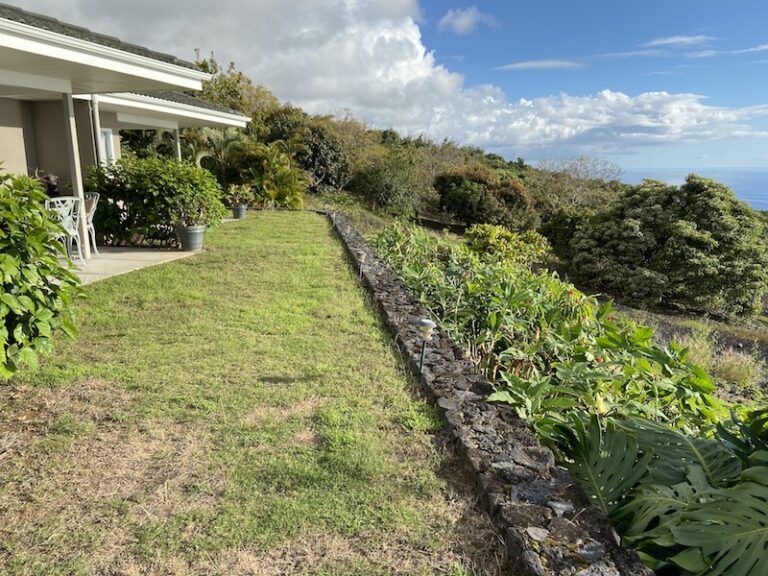 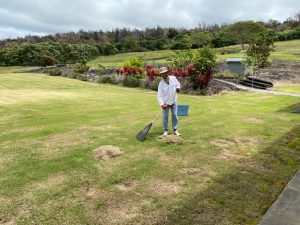 After mowing the lawns it’s time to rake up the clippings.

Pro tip: use grass clippings to cover any sections of your lawn that are struggling. 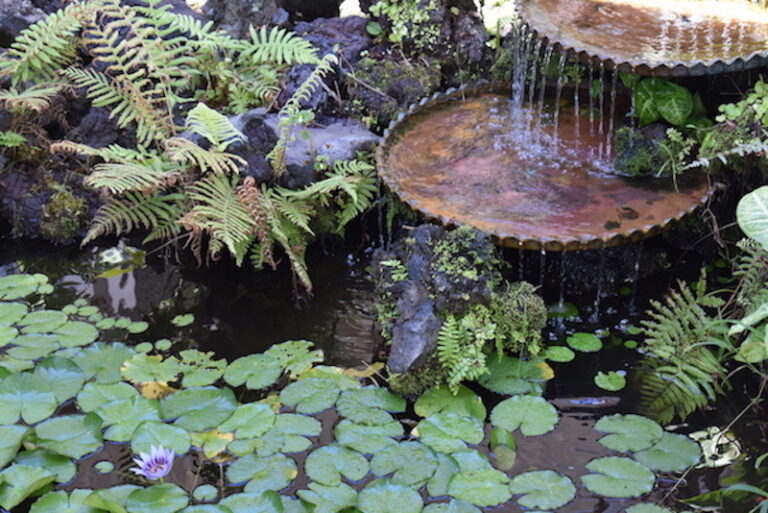 Overgrown weeds cleared, and ferns cut back. The garden around the pond is weeded and the red anthuirums once again emerge, taking pride of place! 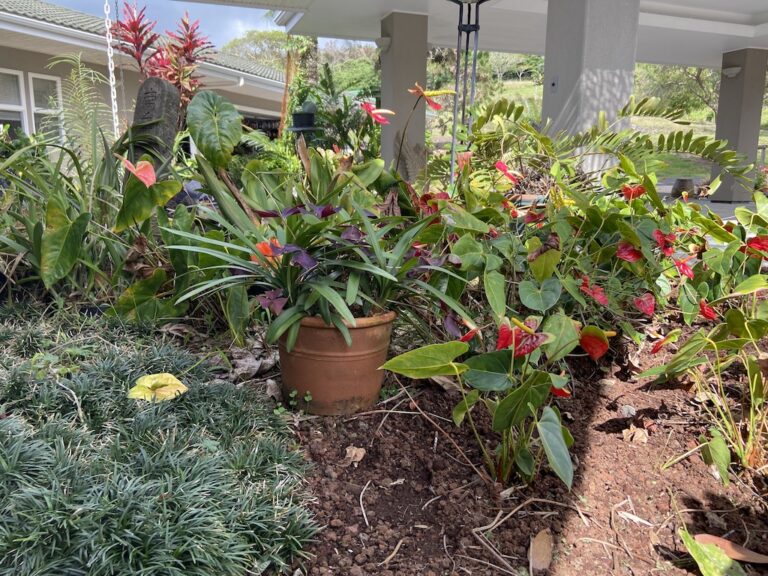 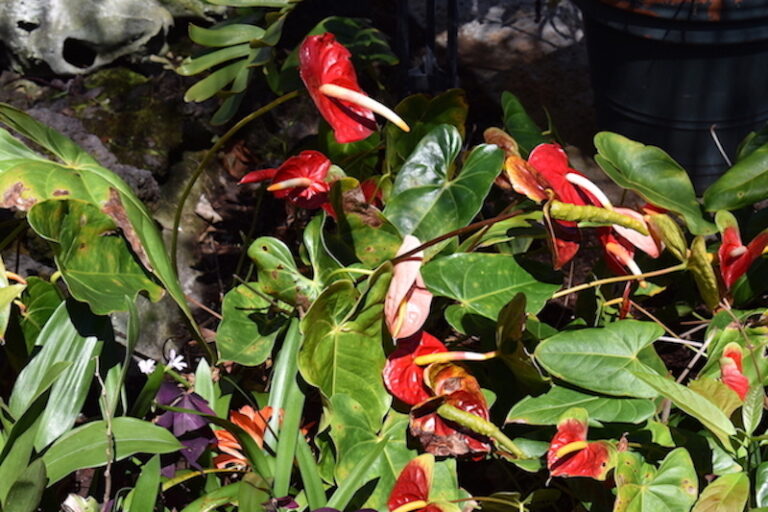 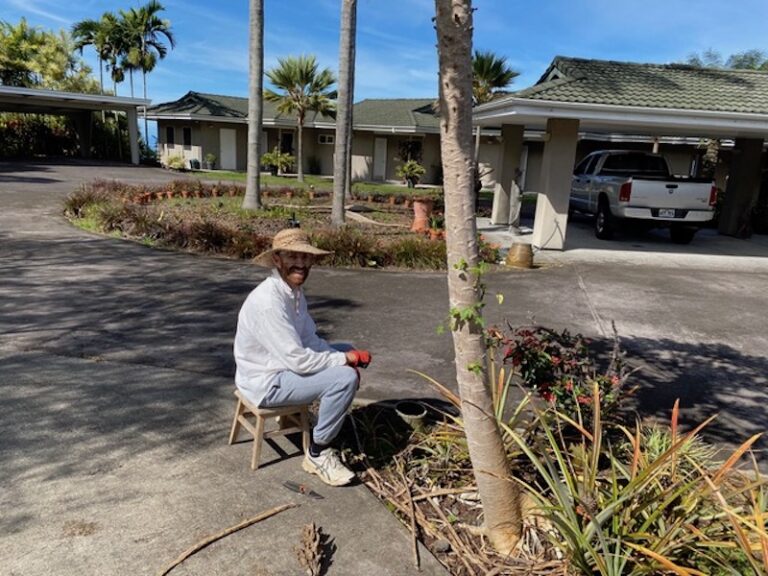 Next, the pineapple grove. A good crop of pineapples has grown well in this part of the garden and with a harvest not to far away it was time to clear the dead branches from the papaya tree and get to pulling weeds.

Joining the gardening team was this little lizard. At first suspicious, it soon appeared to like hanging out with (and on) Clem! 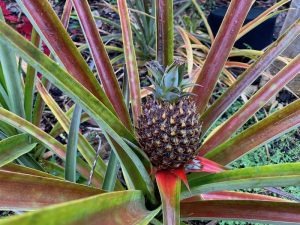 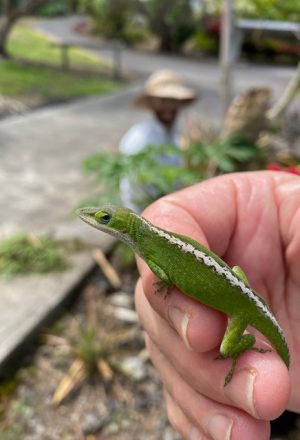 A visit to the upper pastures...

Poncho & Lefty (the donkeys) and Sunny (the horse) were curious onlookers to all of this activity. A midday break for lunch and a visit with the gang was in order.

Next on the agenda, a change of pace – down the driveway to the warehouse. 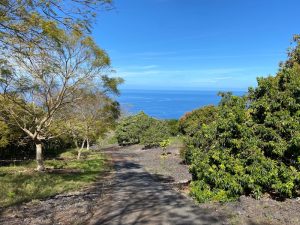 Cleaning up around the warehouse 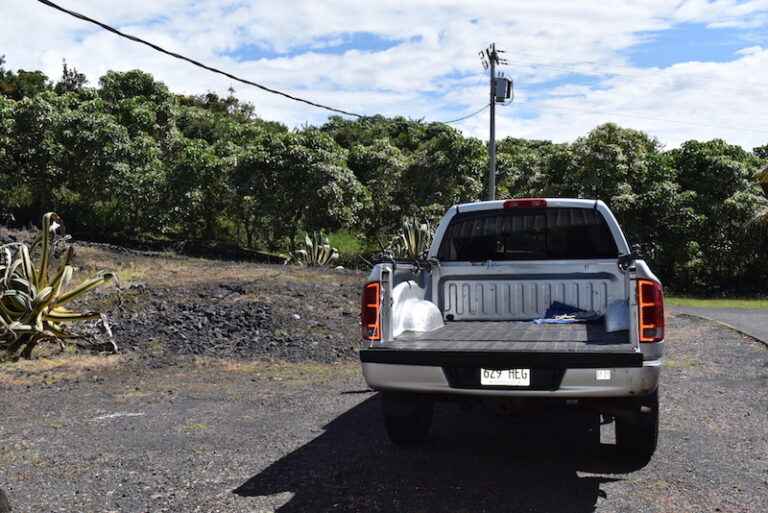 Everyone accumulates clutter and Horizon is no different. The warehouse, on the lower slopes of the property, was in need of a spring clean and then a run to the refuse station down the highway for a rubbish drop off.

Recycling was also sorted. Cans, bottles and cardboard were put aside for a separate trip to the recycling plant in Kona. 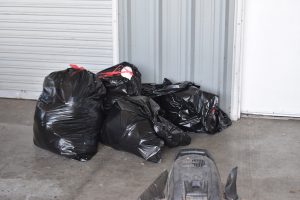 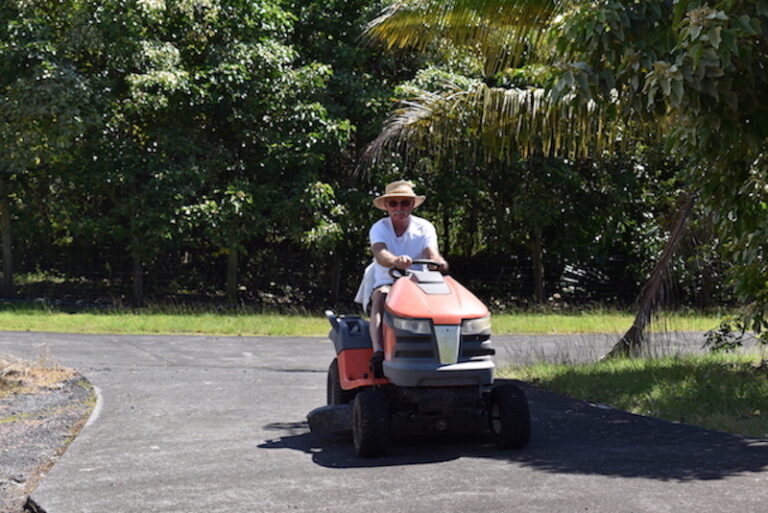 Staying on top of all the mowing that needs to be done on the property is almost a full-time job. However, it’s made significantly easier by the use of both a ride-on mower and a tractor with a mower attachment – to tackle the rocky pastures that need to be cleared.

Fun fact: Wild Pigs. Normally cute, especially the piglets, wild pigs can cause havoc on the property. Whether rooting about in the garden devastating crops of bananas or pineapples – or anything remotely edible – pigs are tough to keep out (finding ingenious ways to dig under the boundary fences to get in). By keeping the pastures clear of long grass it makes it easier to hunt the pigs and protect the Horizon crops from being plundered.

Whether with guests or without, a day at Horizon wouldn’t be complete without another sunset. Tools down, gloves off, and dinner watching the sun disappear over the Pacific Ocean on the Kona Coast. A pretty good reward for a day’s work keeping Horizon Guest House in shape. Look out for details on our spring planting in the vegetable and herb gardens in the next lockdown dispatch. 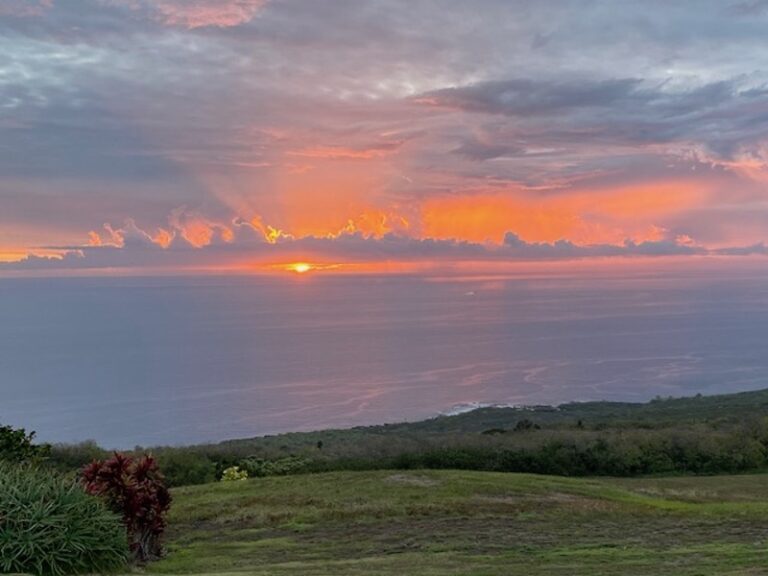 How have you been spending the lockdown? In the garden? Spring cleaning the house? Keeping busy with arts and crafts? Baking? Let us know what you’ve been up to in the comments below. We’d love to hear from you.