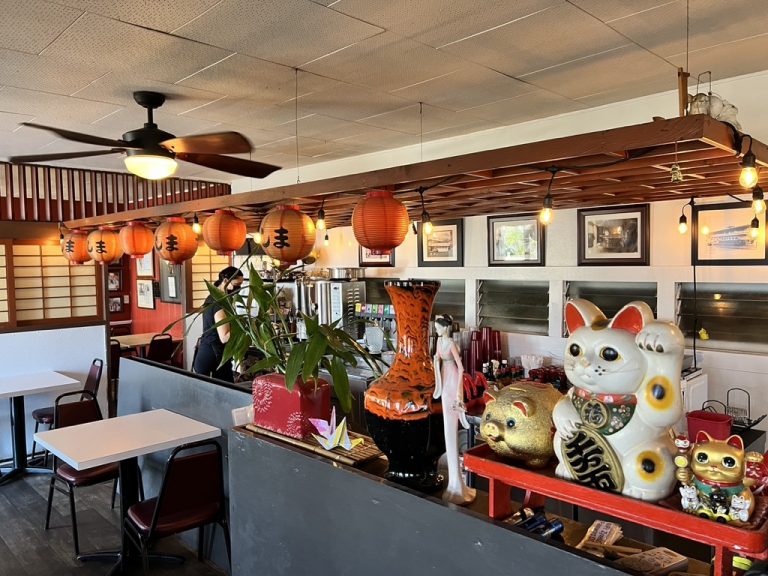 Teshima’s Restaurant has become a firm favorite among locals and tourists on the Kona Coast. Located in Kainaliu, just south of Kona, they serve a mix of simple Japanese and Hawaiian cuisine. We stopped in for lunch, early on a weekday. 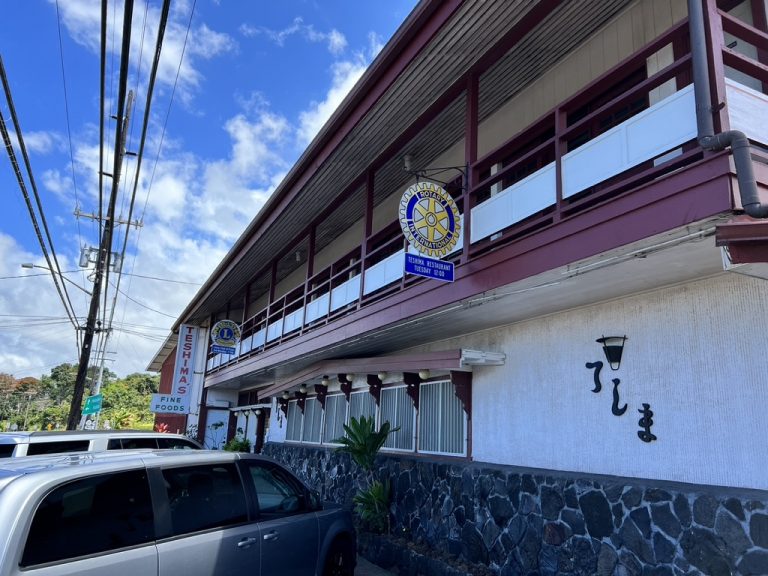 We arrived at Teshima’s on Monday morning at 11:30am in time for an early lunch. Surprisingly it was already busy, but we didn’t have to wait long for a table.

Teshima’s is next to the Buddhist temple at the juncture of the old and the new Mamalahoa Highway. There is parking in front of the restaurant and also in the parking lot directly to the right of the building (in the direction of the gas station). 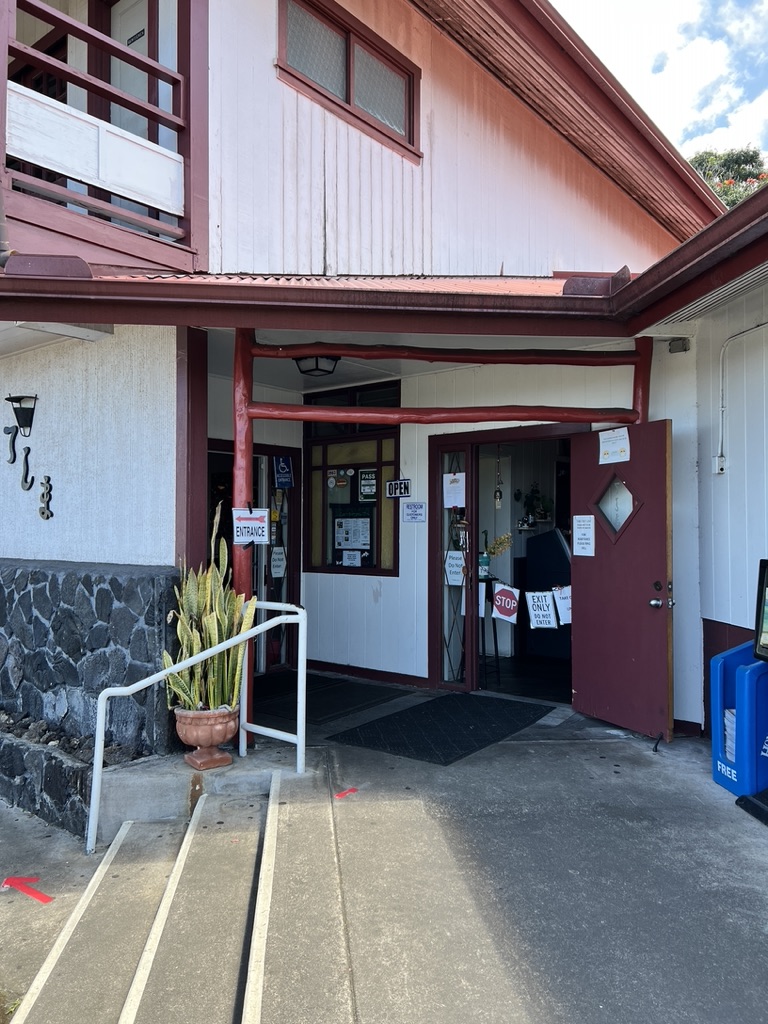 There is plenty of seating inside, with a mix of booths and tables. 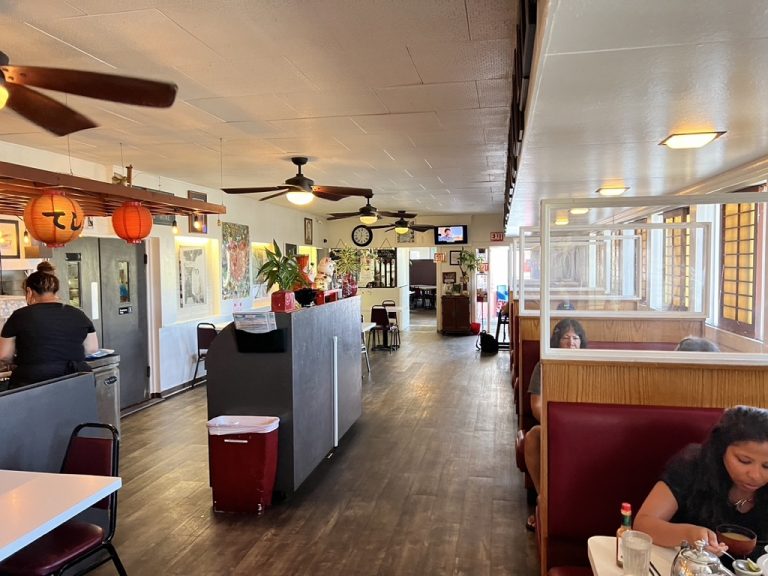 The interior has been nicely decorated and is spacious with large ceiling fans. They do not take reservations but they do accept take-out orders and serve alcohol. 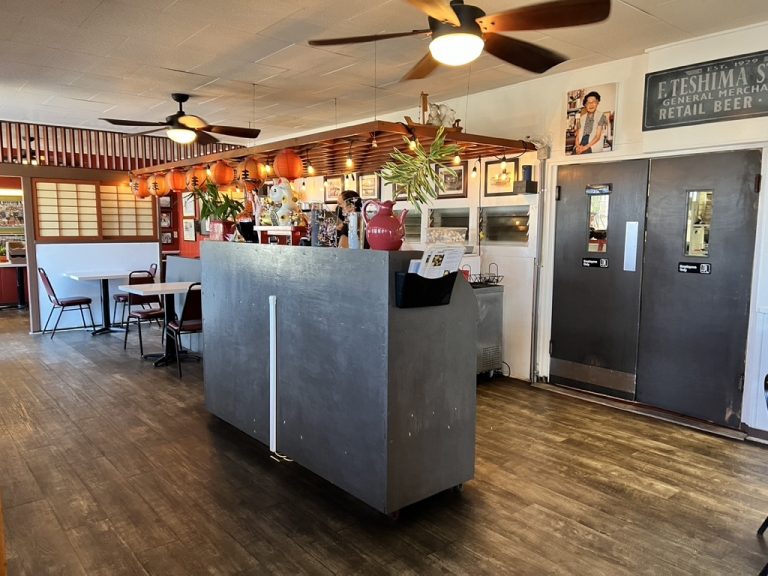 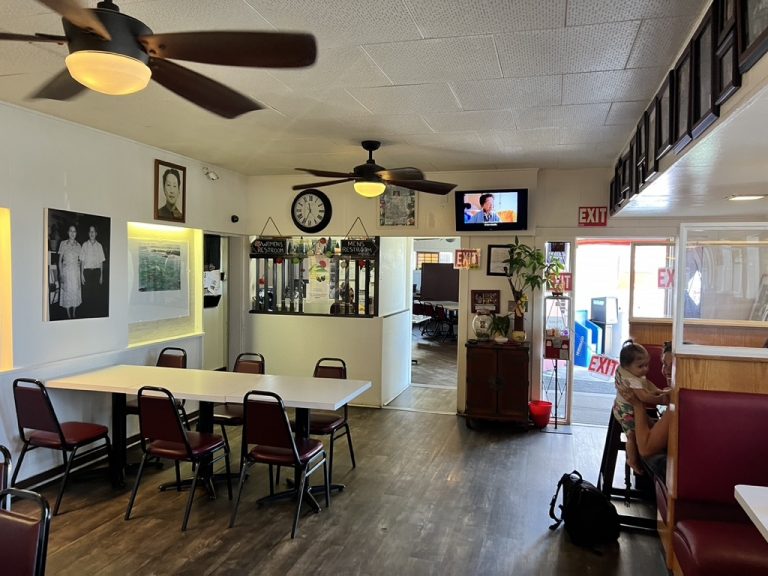 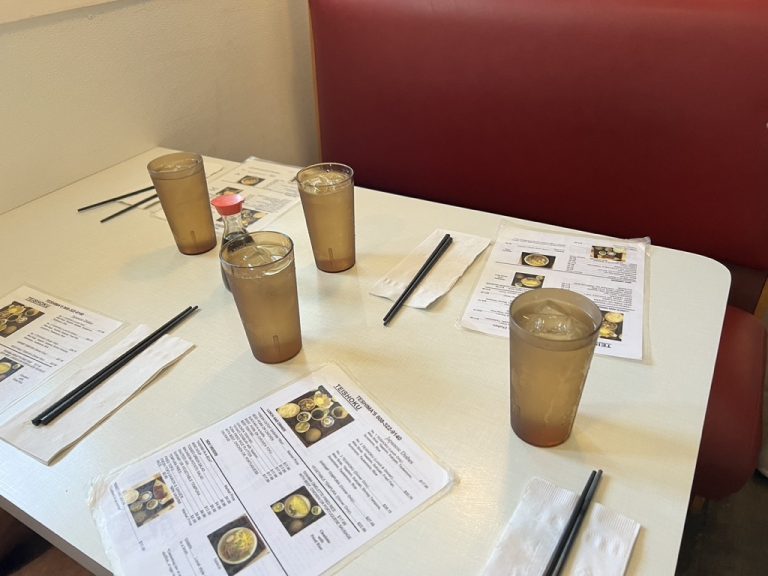 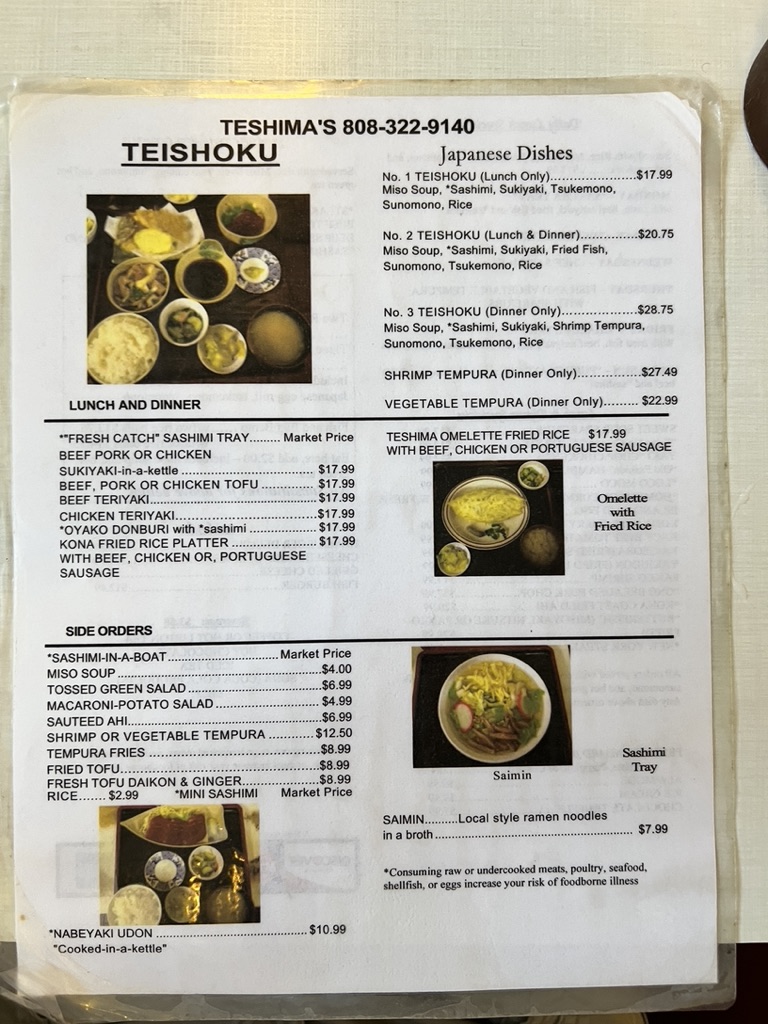 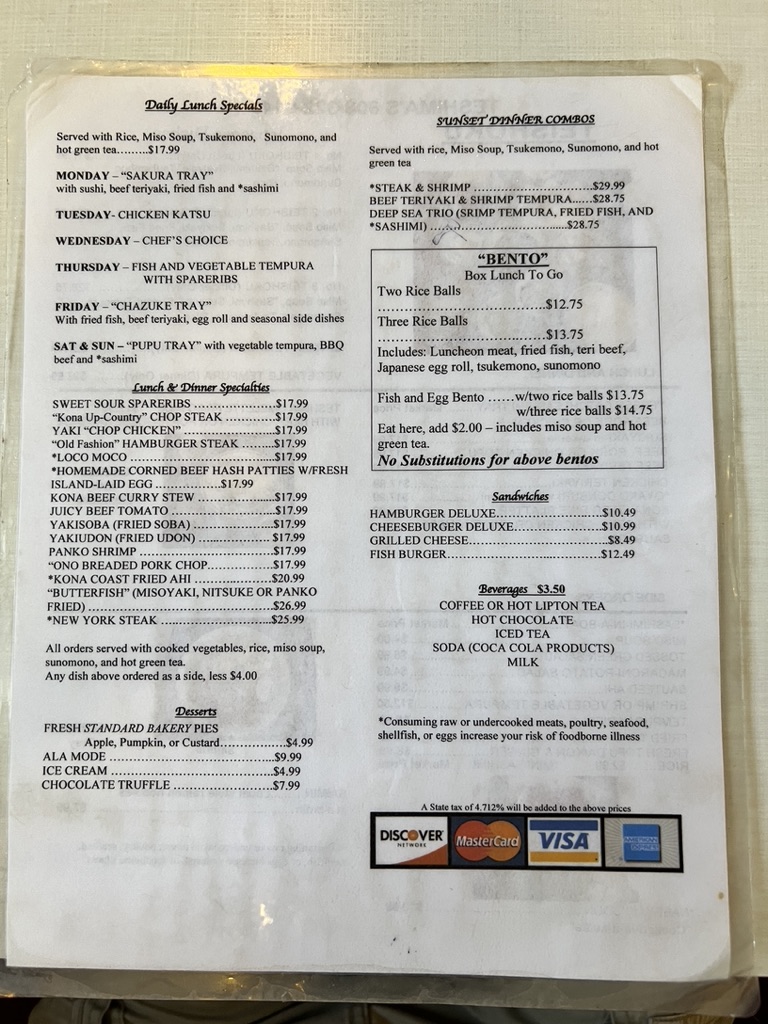 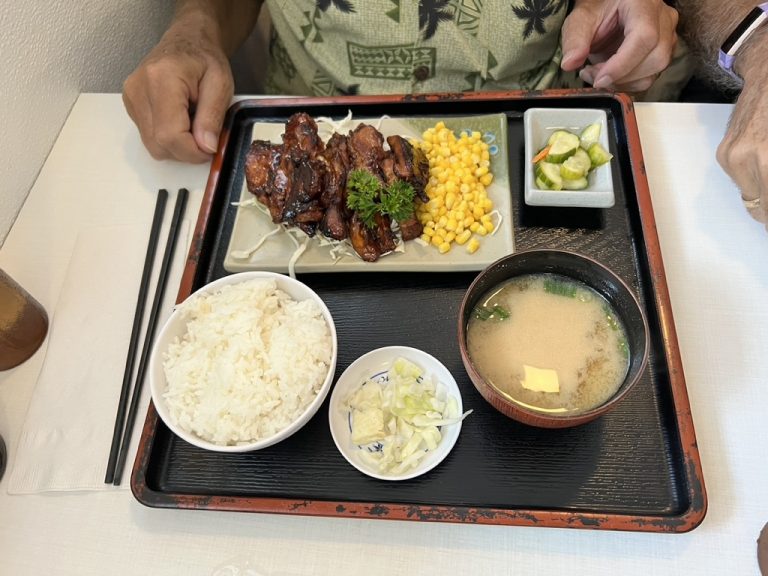 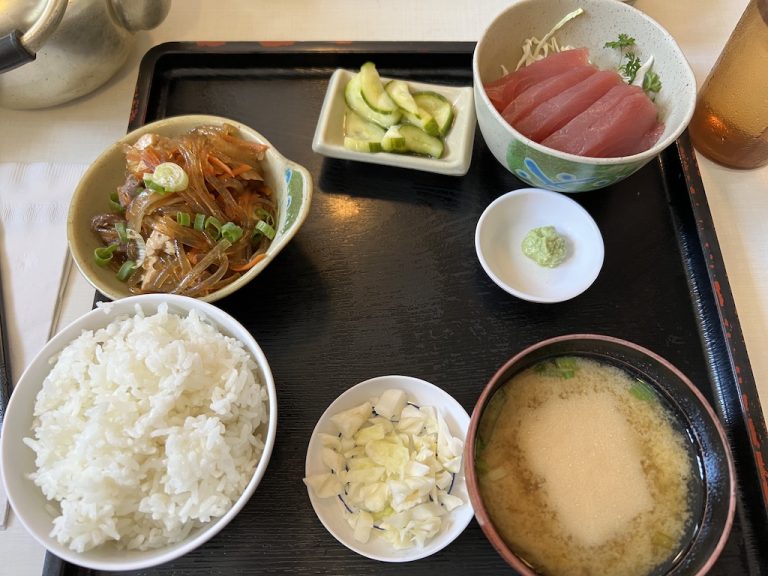 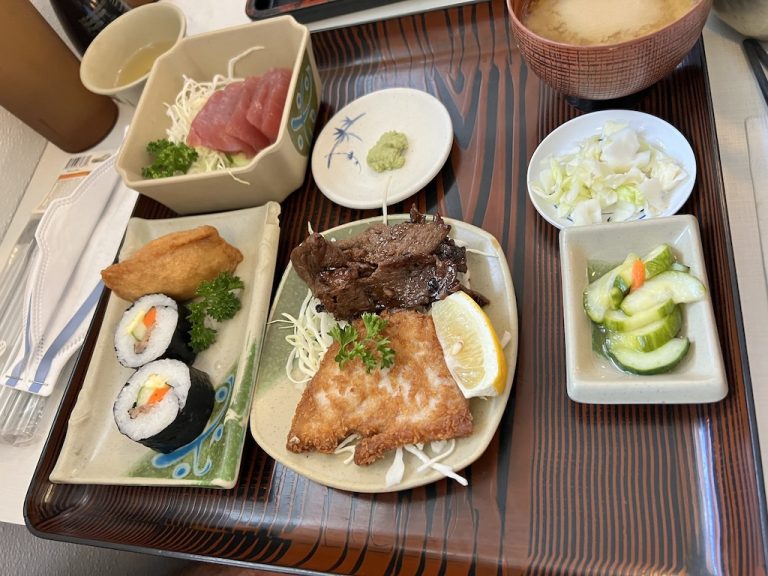 Service was quick, friendly and efficient. The dishes we had were delicious, and the flavors simple. The range of Japanese dishes isn’t as extensive as a dedicated Japanese restaurant (there are only a couple of sushi options on the menu) but the Hawaiian dishes are very popular with the locals.

Make sure you check out this local institution when you’re next in Kainaliu. 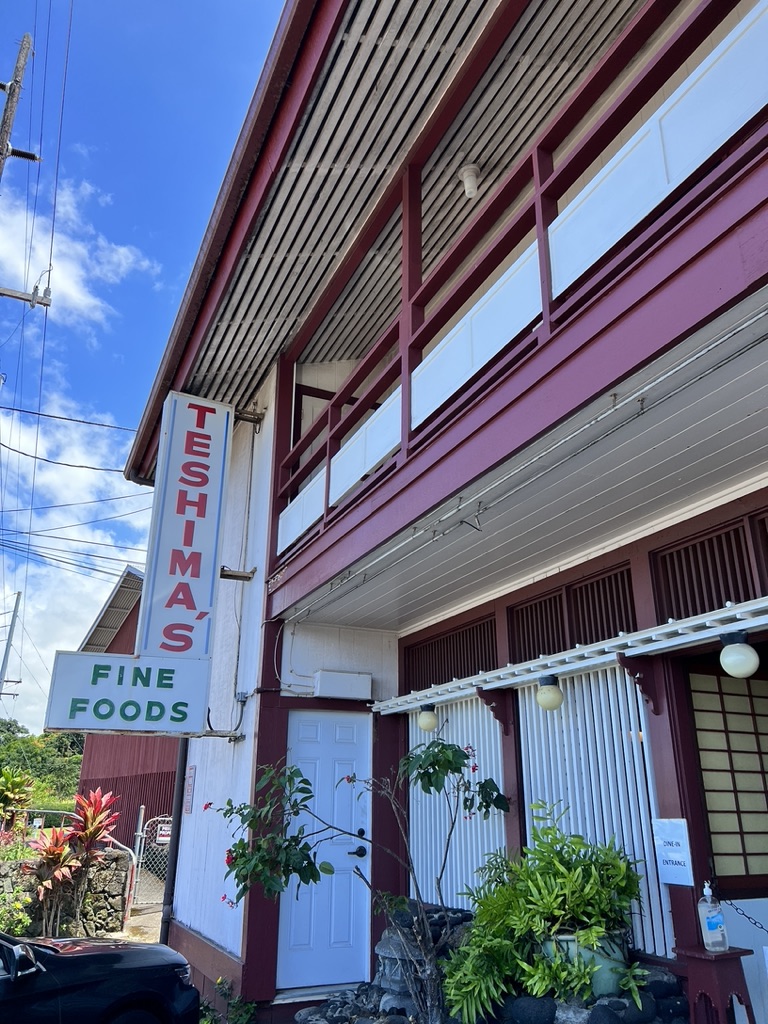 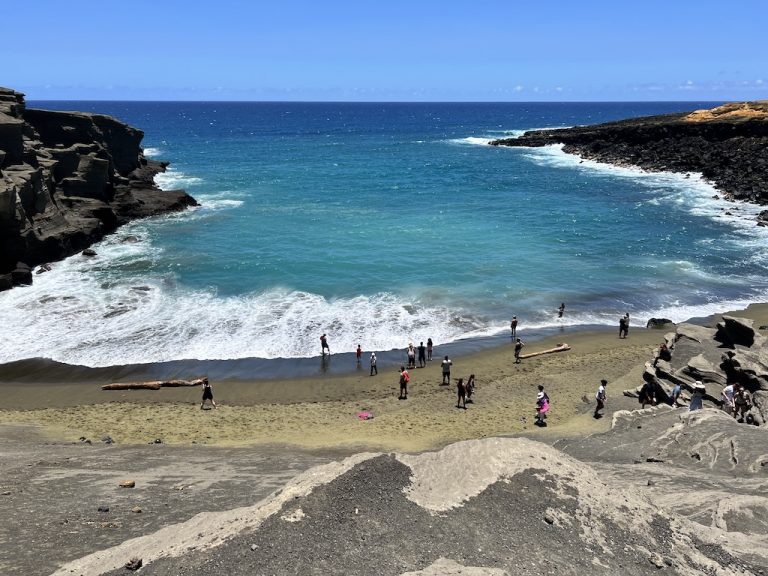 Green Sand Beach is very close to Ka Lae (South Point) in the Kau district of Hawaii. South Point is the southernmost point in the United States and is also well-worth a side-trip or a separate trip on a different day. 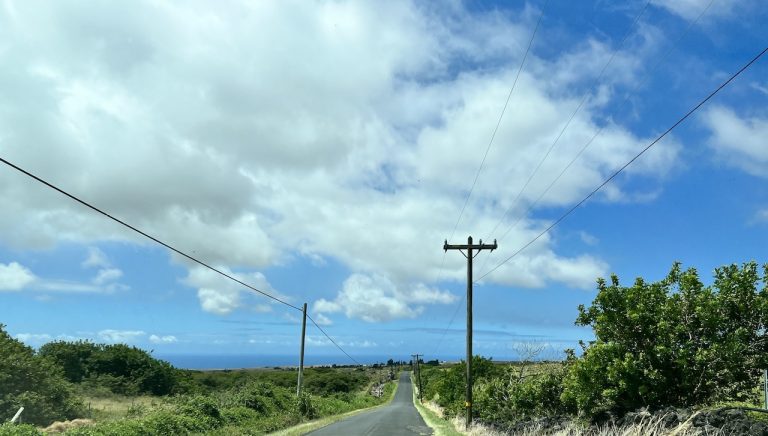 Green Sand Beach is not far from the small settlement of Naalehu, one of the few towns on the main highway between Volcanoes National Park and South Point. The beach is about 2 hours south of Kona. 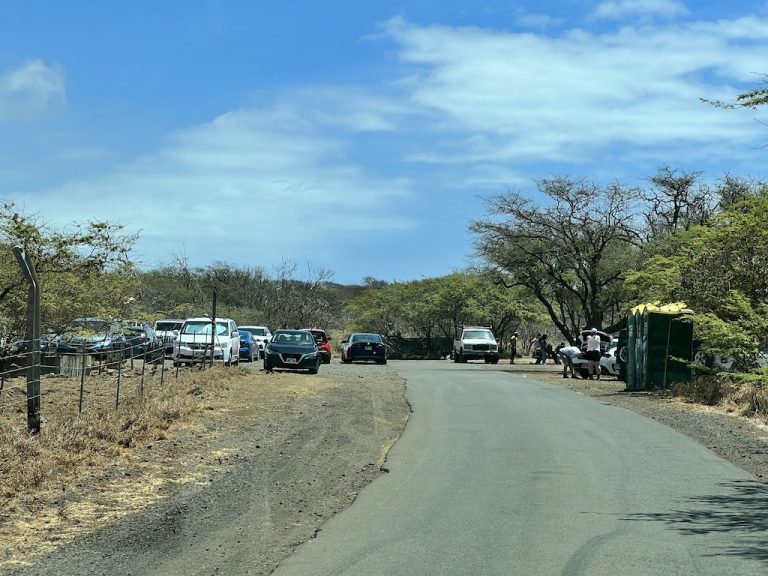 How to get there

Drive towards South Point, between mile markers 69 and 70 on Highway 11. At the end of the road it will fork. To the right is South Point itself and to the left is the Green Sand Beach parking lot.

We visited Green Sand Beach on a beautiful sunny Thursday afternoon and found the parking lot at the end of the paved road already close to full. There are a couple of options for visiting Green Sand Beach from this point:

The hike to the beach is approximately 4.5 miles roundtrip. Key to making this an enjoyable hike is avoiding the sun. There is no shade on the hike and it will be dusty (passing cars kick up significant amounts of dust). Start early, bring plenty of water and proper hiking shoes.

From the parking lot, make toward the boat ramp and once there head to the left and onto the trail. The hike will take about an hour each way depending on your pace.

There are no restrooms but there are port-a-potties in the parking lot and also back at South Point. 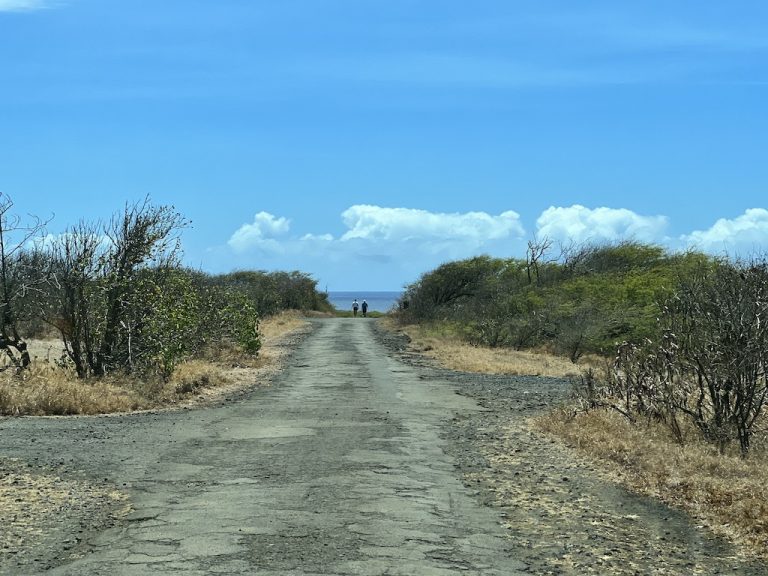 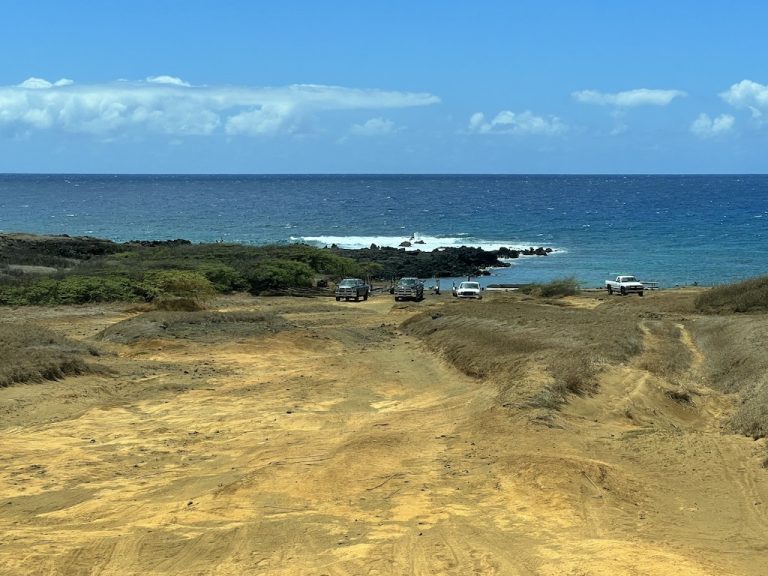 Did you know that Green Sand or Papakōlea Beach is one of only four green sand beaches in the world? The others are located in Guam, the Galápagos Islands and Norway.

The beach used to be a cinder cone volcano. The lava ejected from the volcano was full of olivine. Subsequent to the eruption, erosion caused by wave action and weather began to erode the basalt rock until only the olivine was left remaining – hence the green sand! 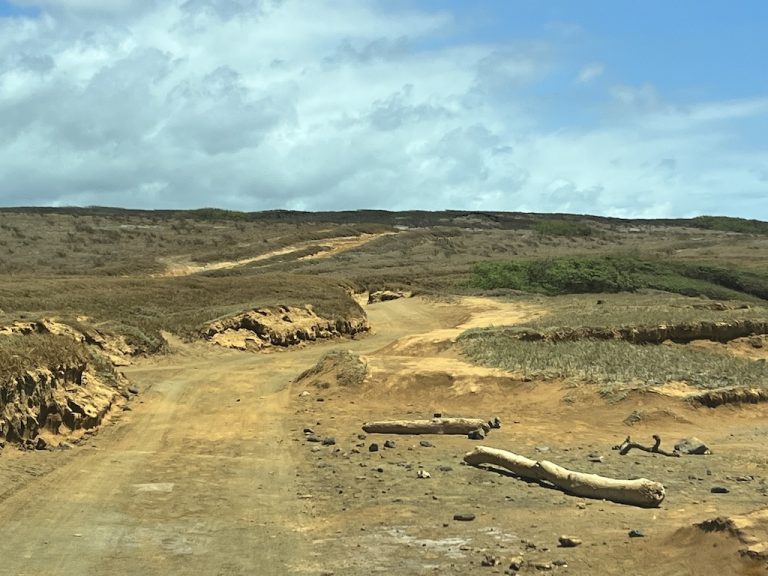 We discovered the hard way that the road from the parking lot to the beach is in fact a collection of roads, many of which are treacherous, even with a 4×4. Unfortunately, these dirt tracks have caused significant damage to the landscape and the land is deeply scarred by the effects of large-scale traffic.

We had to backtrack a number of times when we found that the route we had taken would not be passable, or the ground too unstable. At one point we followed a local truck ferrying people to and fro which turned out to be the best strategy. 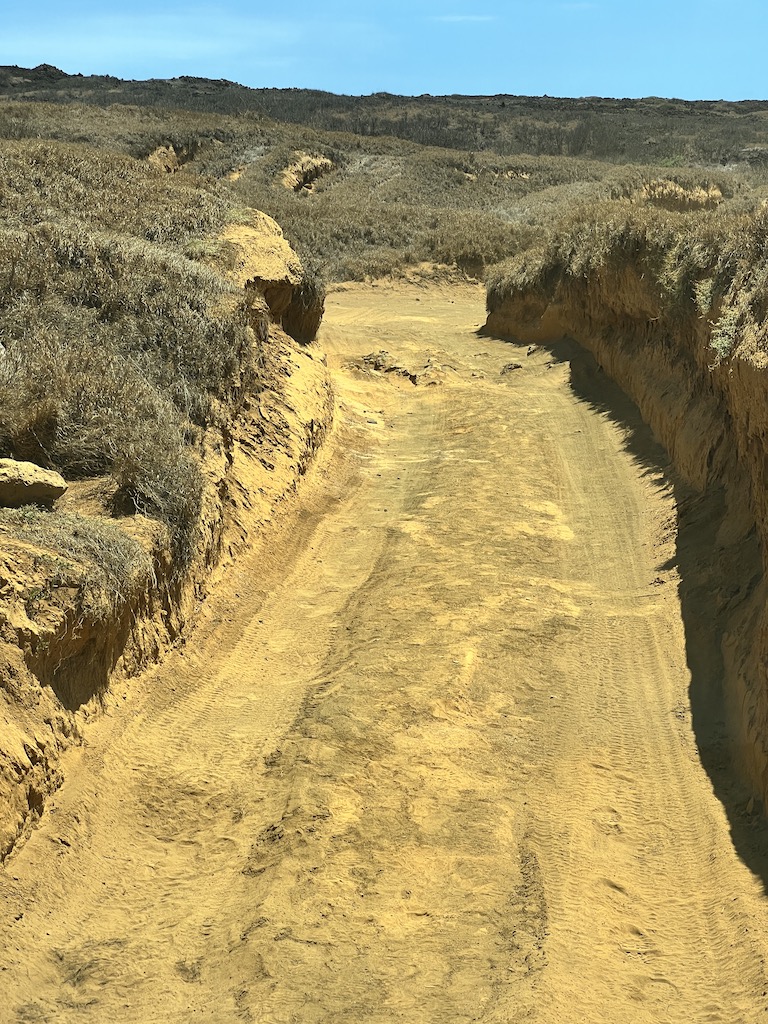 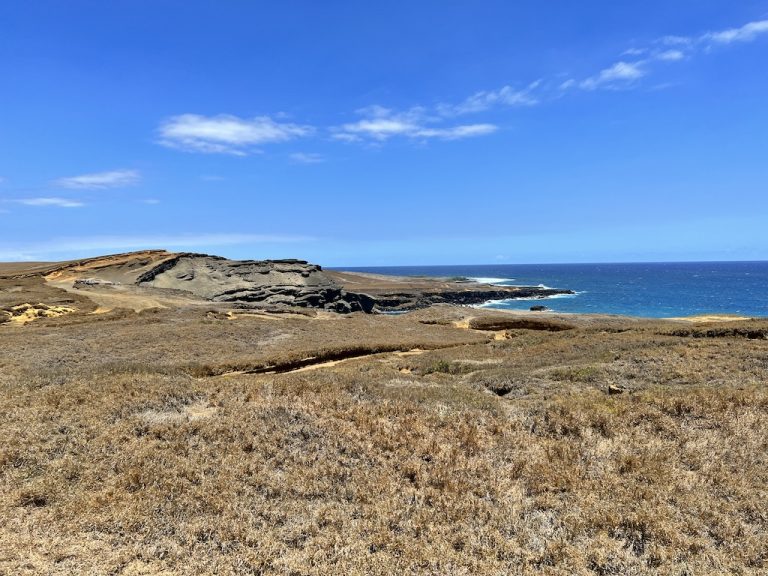 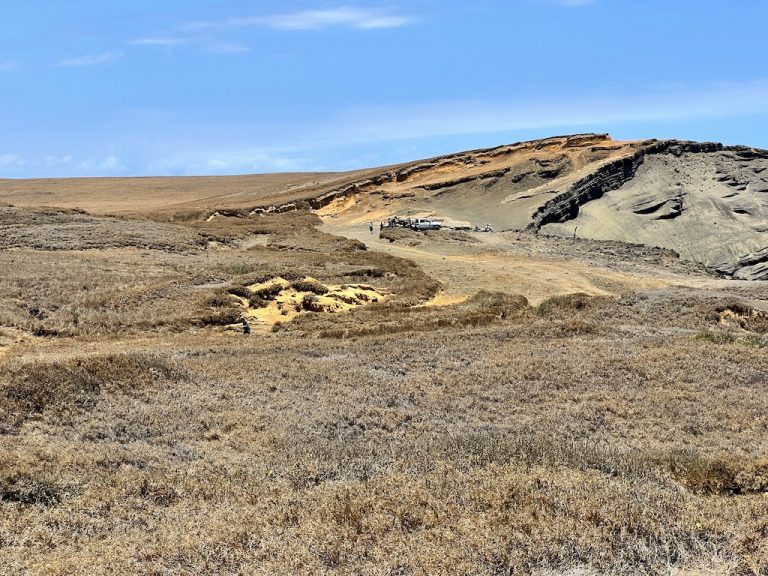 A parking area is visible just above the access to the beach. 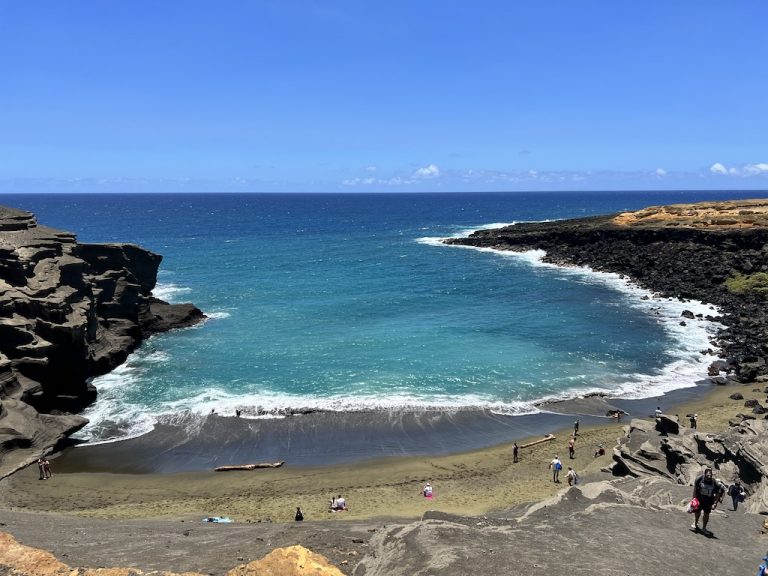 Access down to the beach by foot is steep. A ladder makes the descent easier but make sure to wear sensible shoes, especially if you intend to hike there and back. 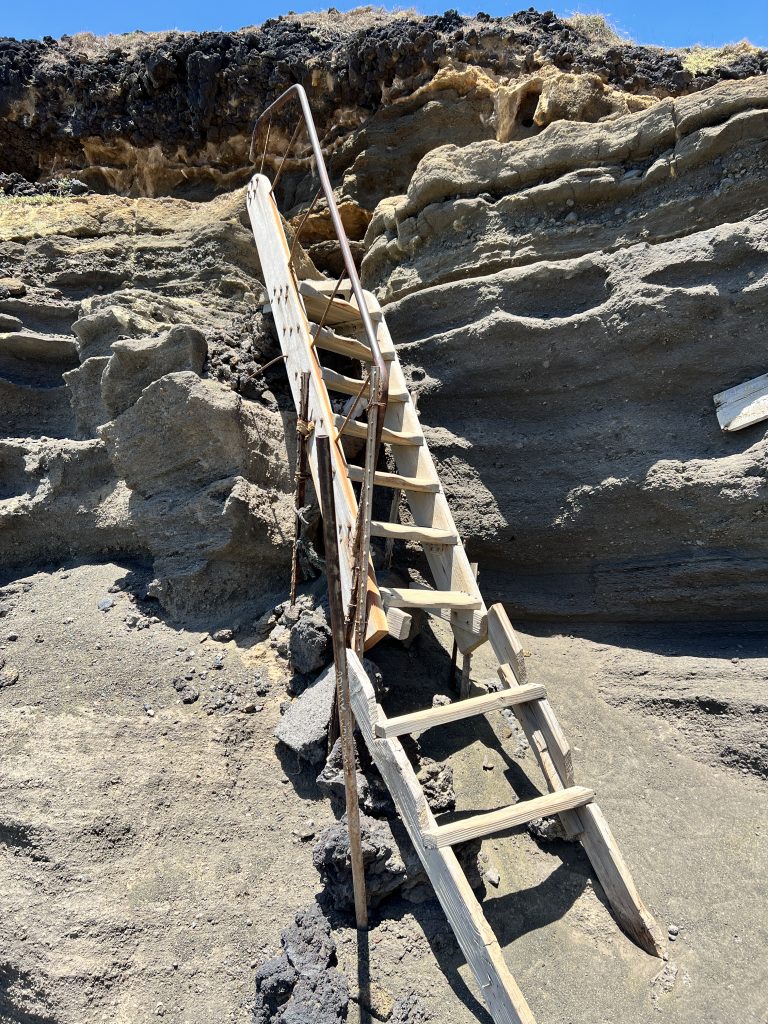 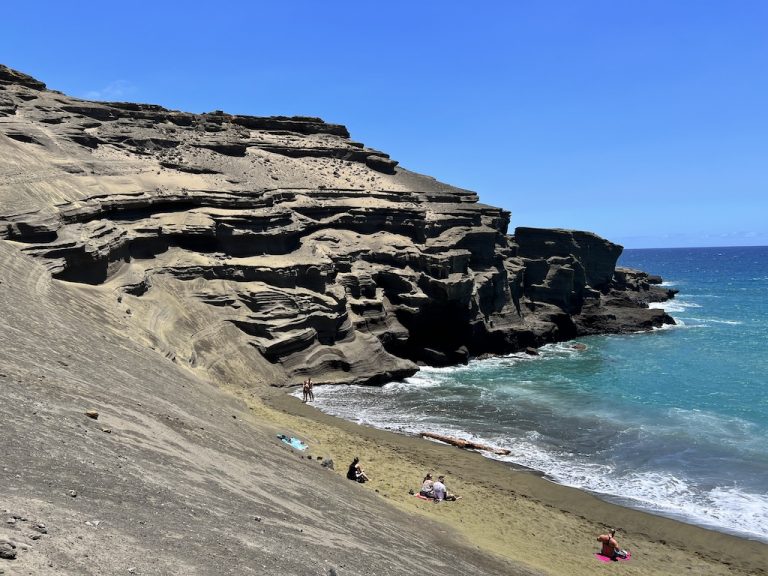 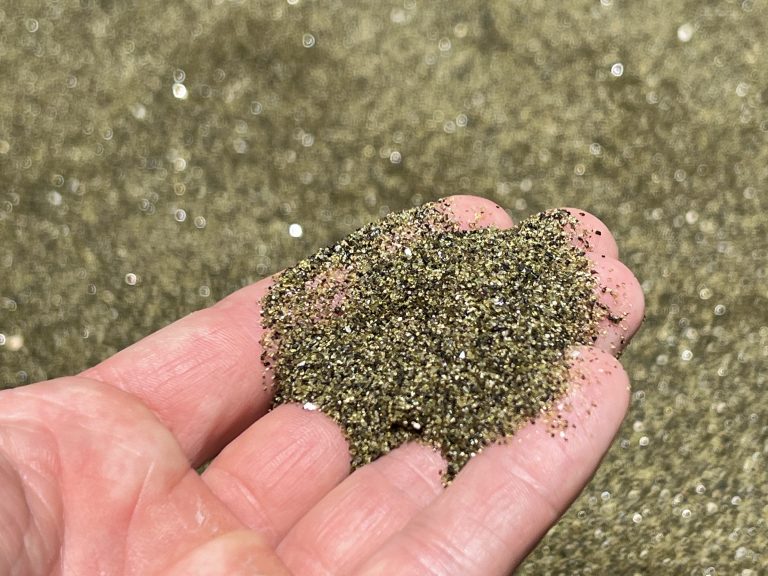 The olivine group is made up of eight minerals, including forsterite (magnesium silicate, MgSiO4) and fayalite (iron silicate, (FeSiO4). These minerals are end members of a solid-solution series based on the mutual substitution of iron and magnesium.

Olivine crystals are formed at depths of at least 25 miles below the earth’s surface, in the high pressure zone of the Earth’s upper mantle. Volcanic eruptions bring the magma to the surface and these magmas solidify into basalt and basaltic pumice.

For example, Kilauea has a magma chamber that is between 3 to 6 miles beneath the surface but draws magma from much deeper where olivine crystals are present. 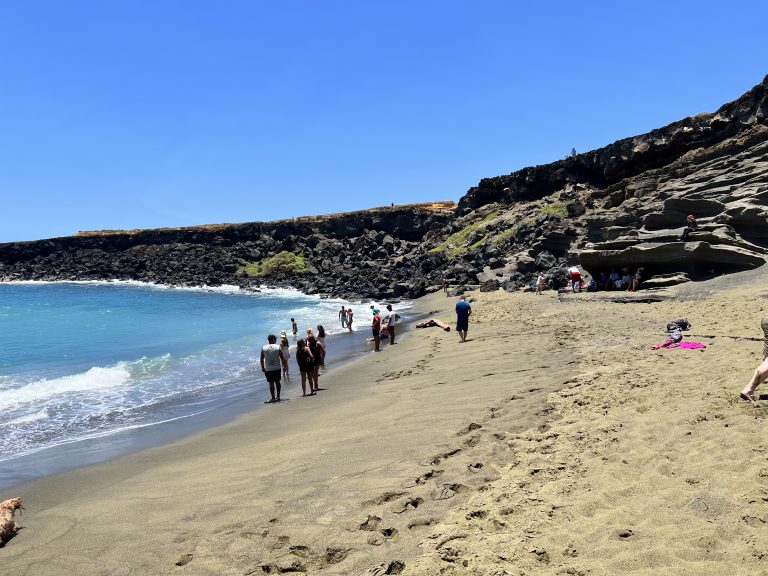 Visiting Green Sand Beach is well-worth the effort but how you get there is just as important. Off-road access is causing significant damage to the landscape, while catching a local ‘shuttle’ is not only considered illegal by the state it’s also dangerous. We recommend reducing your environmental footprint by hiking in and enjoying one of the Big Island’s amazing natural attractions.