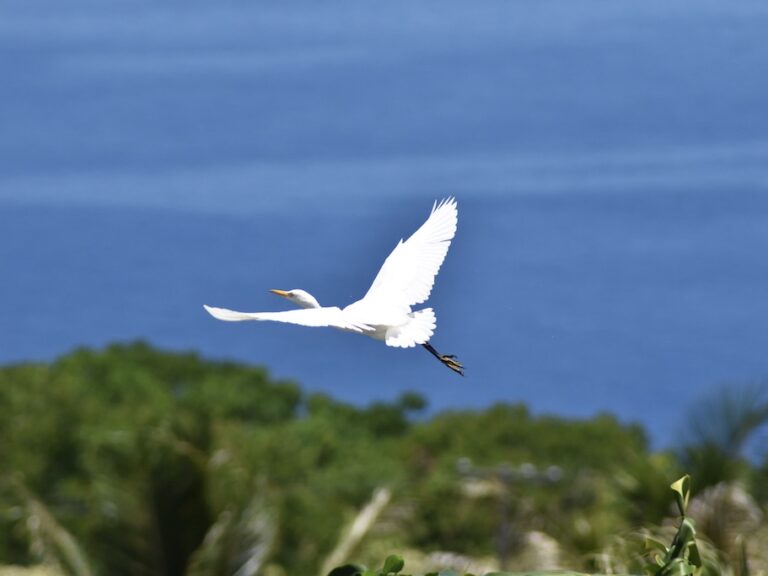 Late summer has brought with it the arrival of a flock of cattle egrets to Horizon Guest House. These brilliantly white birds have found a summer home in the monkey pod tree in the upper pasture. Here they roost at night while during the day they follow the animals, keeping flies and insects at bay.

Cattle egrets originated from Africa, arriving in South America in the late 19th century before spreading through most of the continental United States in the 1940s.

They were first introduced to the Hawaiian Islands in 1959 by the Board of Agriculture and Forestry, in conjunction with local cattle ranchers. The birds were an attempt to try and combat the plague of flies that were affecting cattle herds. The flies were responsible for causing lower than usual weight gain in cattle, as well as causing damage to their hides.[1] 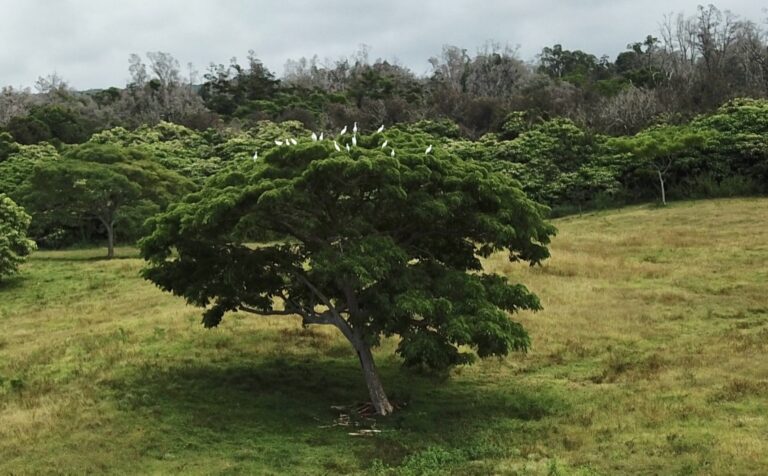 In total, 105 birds were released across the islands. By the early 1980s their population had exploded to approximately 30,000 birds. 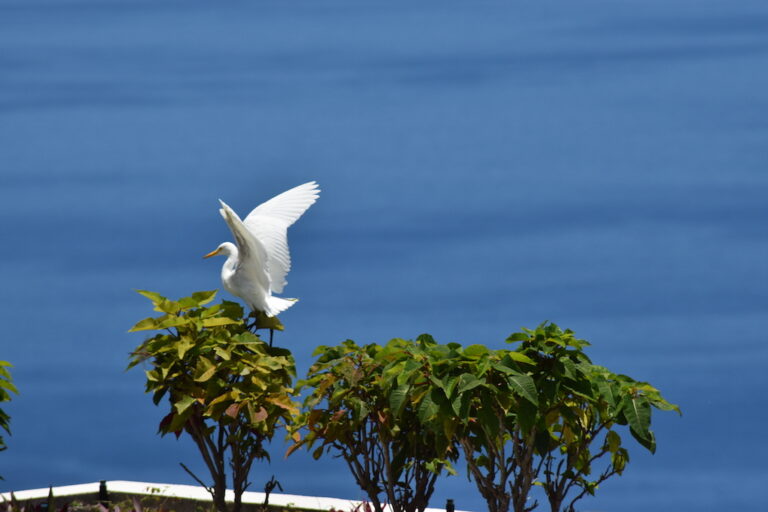 Cattle egrets typically grow to around 20 inches and are usually seen in large flocks, within close proximity to wetlands. 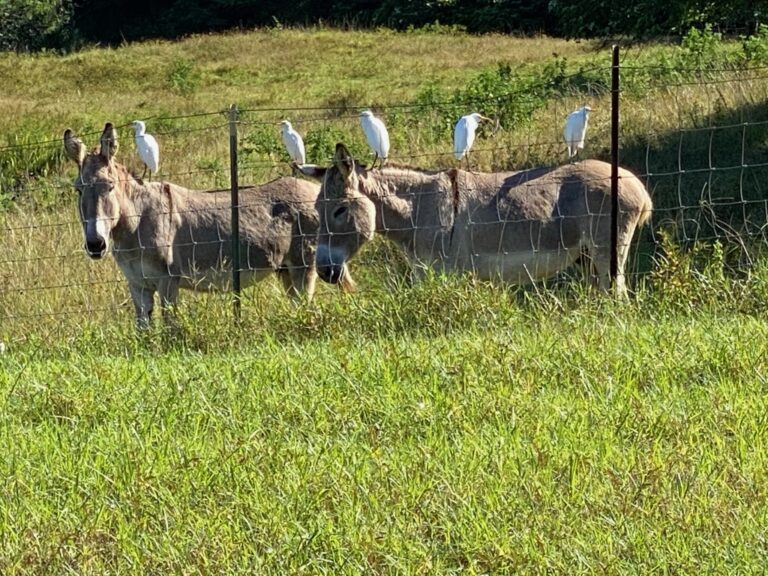 Our visiting cattle egrets have quickly found a home in the pasture with the horse, donkeys and goats. The birds are content to follow the herd as it migrates about the pasture during the course of the day. Typically, you’ll find the birds perched on the backs of Sunny (the horse) and Poncho and Lefty (the donkeys).

In this way they provide a useful service to the animals, feeding on the flies that might be bothering them, as well as any insects.

Their impact on other endangered birds though is significant. Cattle egrets are known nest predators. In particular, they prey on the nests of the Hawaiian duck (koloa), Hawaiian stilt (aeo), Hawaiian common moorhen (alae ula) and the Hawaiian coot (alae keokeo). There are even instances of cattle egrets taking prawns from aquaculture farms![2] 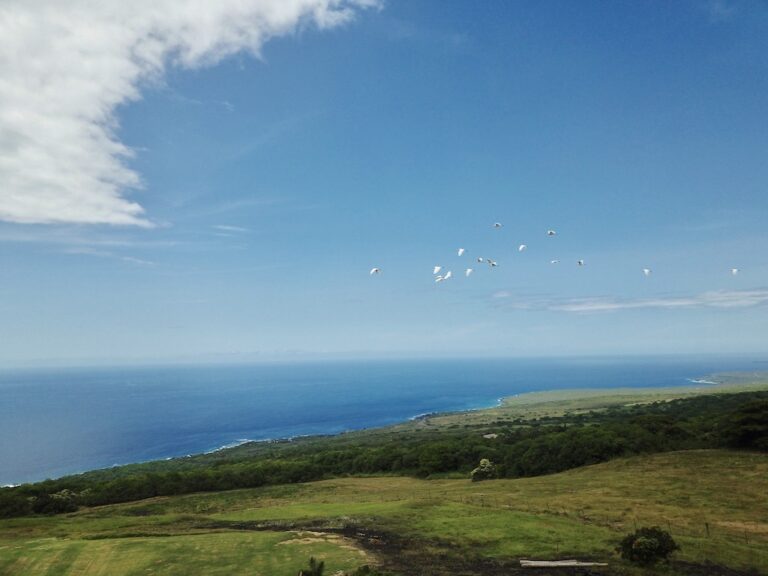 The original intention of introducing cattle egrets was to use them as ‘biological control agents’.[3] Instead, these birds have joined a long line of other introduced species that, having failed to solve their original objective, have become part of a bigger problem – causing disruption to indigenous fauna. 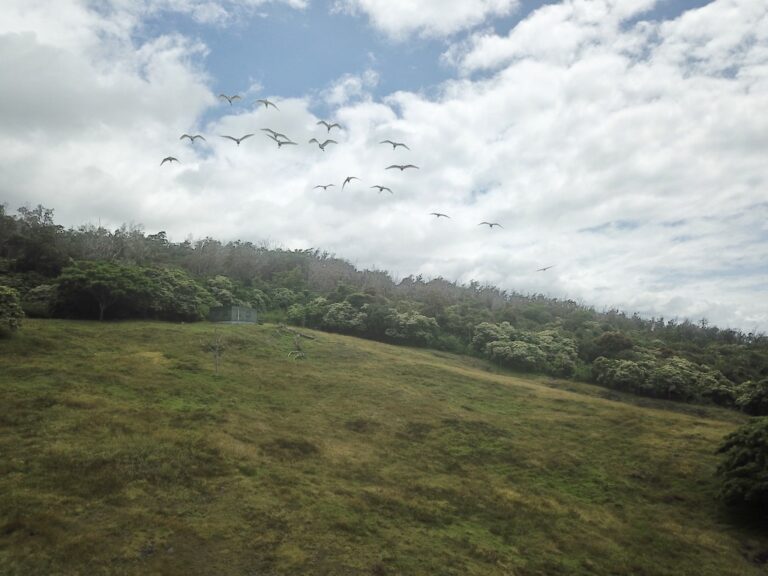 In 2017, a control order was introduced for migratory bird species in Hawaii.[4] This control order targeted cattle egrets and barn owls. It identified them as invasive and threatening to native species. It also concluded that these bird populations could not simply be keep under control by non-lethal means. The order sanctioned the culling of cattle egrets by state and federal employees of specified agencies, such as the U.S. Fish and Wildlife Service. 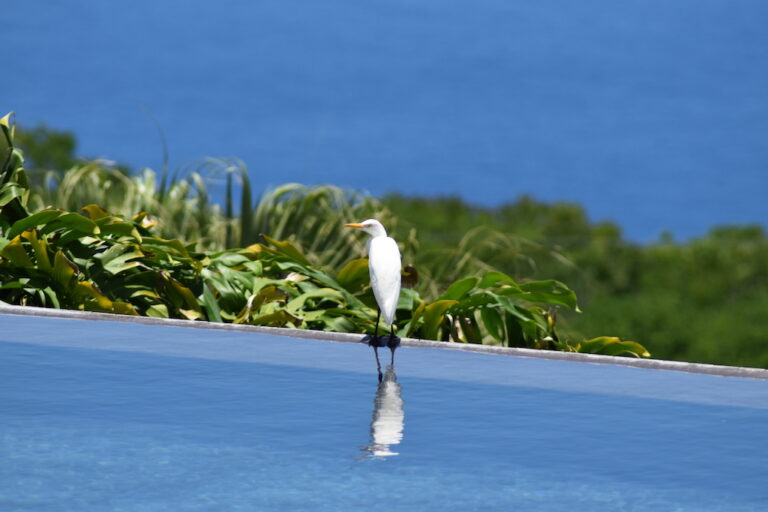 Recognizing the fragile nature of Hawaii’s ecosystem is important to understanding why such action is necessary. Invading or introduced birds like the cattle egret have changed the habitat of some of our most precious and endangered species.[5] Controlled culling of cattle egrets may be the only way Hawaii can safeguard some of its most precious residents from the threat of extinction.

The cattle egret is an elegant bird and provides a service to cattle and other animals, but it’s relationship with endemic species remains problematic.